On Friday 6th July 1990, the O’Dubhda Clan held its first rally. The event was organised by a team lead by Gertie MacHale and her son Conor, who have been involved with the O’Dubhda heritage for many years. Together with Mr and Mrs Tuffy and a number of Enniscrone people, they decided to act while others hesitated, and their bravery was well rewarded by the turnout. In the Convent Hall at Enniscrone, well over 100 clansmen and women gathered for the first “hosting” in almost 400 years. They came from all over Ireland, Scotland, England, Wales, the United States, Australia, Canada and Africa, and their ages ranged from 18 month old Keelan from Enniscrone, to 86 year-old Bill from Shannon. After a few hesitant moments, they started to talk to each other, with the result was that the planned events began almost an hour late! (The ice was probably broken by the supper of Moy salmon and Irish brown bread, laid on by Maree MacHale and a team of volunteer caterers.)

Before the evenings entertainment, a commemorative vellum scroll, (pictured below), prepared by Sr. Emer Mulderrig, was signed by all those present. 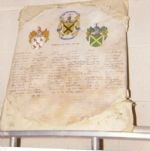 Mary Nash from Bord Failte and Michael Curley from North-West Tourism gave introductory talks and this was followed by a musical and dance entertainment provided by the Kilglass branch of Comhaltas Ceoltori Eireann, the finale being a medley of pipe tunes from Larry O’Dowd. But, this being Ireland, everyone adjourned to Maughan’s pub and continued the party into the next morning. All agreed that the “craic was great!” Historical tours were organised. That on Saturday taking us through Tireragh with visits to Castleconor and a short talk by Cyril Lonergan of North Mayo Historical and Archaeological Society, Ardnaree where Conor MacHale explained the O’Dubhda connection with the area and the Augustinian Abbey and Ardnaglass, stopping at The Hiltop, Culleens for lunch. On Sunday, the highlight was a visit to the ruins of Moyne Abbey, where Fr. John (Cormac O’Dubhda) was martyred in the 16th century. Jim Gilvarry of Crossmolina Historical Society gave a guided tour and the visit finished with Fr. Michael Doody SJ, from St Louis in Missouri, saying a short ecumenical prayer in memory of all the dead.

Throughout the weekend, there was an exhibition of documents concerning the O’Dubhda family and Tireragh. Conor MacHale gave a talk on the history of the clan, and the significance of the records kept by the MacFirbis bardic scholars. It surprised many to learn that the O’Dubhda clan had played such an important part in the history of Ireland, and Connacht in particular. The event also marked the launch of Conor’s book, “The O’Dubhda Family History.” After the meeting, a steering committee, with representatives from the provinces of Ireland, Scotland, England, USA, Canada and Australia, was appointed to place the clan on a more formal footing and discuss the production of a Newsletter and the revival of the Chieftainship. It was agreed the next rally should be held in 1992. The closing ceremony was held in the field beside Enniscrone Castle, which was last held by an O’Dubhda garrison in the mid 17th century. Tom Dowds (Scotland), representing the returning exiles (“Wild Geese”), planted a Rowan Tree, the sacred tree of the Ui Fiachrach, and Francis O’Dowda, a descendant of the last Chieftain, unveiled a commemorative plaque.