Bord Failte and Clans of Ireland Ltd had chosen 1992 as “Irish Homecoming Year” and were prepared to give assistance to clans organising rallies throughout the country. Clann O’Dubhda made use of their services and this enabled a wider audience to be reached worldwide. The result was that the O’Dubhda’s had one of the best attended rallies in Ireland that year. The second Rally was formally opened by Seamus O’Dowd, manager of AIB Bank in Ballina, who read a goodwill message from Uachtaran na hEireann (President of Ireland) Mary Robinson, herself a Burke from Ballina. Anthony Coleman and the Kilglass branch of Comhaltas Ceoltoiri Eireann again provided musical entertainment.

Right: Members of the O’Dubhda Clan 1992

An exhibition of historical material was opened on Saturday by Paul Byrne, the Sligo County Manager, and representatives from Sligo and North Mayo Heritage Centres were on hand to offer advice on genealogical research. The exhibition also marked the opening of the new O’Dubhda Archive, or the “Modern Annals” as it has been called. Lorcan Dowd and Conor MacHale had agreed to gather any references to the O’Dubhda clan and file the information, to provide a picture of the activities of the clan in the modern world, and any material, no matter how small or seemingly trivial, is most welcome.

The tour on Sunday visited the Ceide Fields, and was led by Dr Seamus Caulfield, Director of the dig. This gave visitors the opportunity to view the Ireland of 5,000 years ago. The area is unique in combining 300 million year old rocks and fossilised plants with spectacular scenery. Above all, however, the landscape with its enclosed farms and dwellings, has been preserved intact by the bog which covered it 5,000 years ago. During the conducteed tour, the party was able to literally step back – perhaps down is a better phrase! – into the landscape that their ancestors trod before the Pyramids were built in Egypt: an experience that was greatly enjoyed by all.

Left: Clansmen and women take a break during a tour.
A meeting of the Clan Association (ie all the people attending) considered the proposals of the Clan Council and agreed to a number of recommendations.

First:
Rallies should take place at 3 yearly intervals: it being considered that annual meetings would be placing too great a strain on those travelling from afar.

Second:
Rallies should be held in September. Partly as this would reduce travel costs for those outside Ireland, and partly that as the holiday season was almost iver, there would not be the same demand for accommodation as in summer,

Third:
A Register of members be compiled and that those on the Register be contacted by means of a Newsletter at periodic intervals.

Fourth:
That members be encouraged to submit any information about members of the clan to Lorcan Dowd and/or Conor MacHale, for inclusion in the archive.

Fifth:
At the next meeting, the Association should consider the election of a Chieftain and Tanaiste.

Sixth:
The next Rally would take place in 1994, as agreed previously, but in September.

Visitors welcomed to the rally with the news that the previous event had been among the most successful of the Irish Homecoming Festival, and that a Certificate of Appreciation had been awarded to the Clan. It is now housed in the new O’Dubhda Archive. As is now usual, trips were organised to display the heritage of the clan, and these proved again to be very popular. The visit to Culkin’s Emigration Museum was perhaps the most poignant, as this was the very building where the emigrant ancestors of some of the visitors would have bought their shipping ticket. A trip to the Famine Museum brought home one of the chief reasons for the emigration of so many from the area, while the visit to Foxford Woollen Mills gave a flavour of life over a century ago.

More ancient sites were also included. The Ceide Fields (pictured here) was a must for some who had been before, and allowed others to travel back 5,000 years for the first time 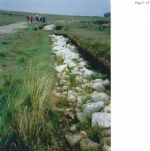 Roscommon was on the list and the burial place of Daithi, the 5th century High King from whom the O’Dubhda are descended is there. This was followed by a visit to Yeats country and the recently restord Park’s Castle. The Clan Association Meeting agreed that, in the absence of a number of members of the Clan Council, the meeting should be of an informal nature. Condolences were offered to Thersa Heery on the death of her husband, Bill, before any business was conducted. It as agreed:

First:
A List of Members be published for the information of members.

Third:
At the next meeting, an Honorary Chieftain and Tanaiste should be elected.

Fourth:
Voting rights were to be ratifeid and an election procedure put in place.

Fifth:
Nominations would require a seconder and the acceptance of the nominee, and if there was more than one candidate, an election would be held.

Sixth:
The duly elected Chieftain to be inaugurated with due honour and ceremony, according to the Brehon tradition, and that he/she should use the title “O’Dubhda, Taoiseach of Tireragh” and the surname “O’Dubhda” as official signature on relevant Clan Association documentation.

Special thanks were recorded to Paddy Tuffy, Sheelagh Rafter and Pamela Cawley, of the local committee, for their efforts in assisting the Clan Association. There was an exhibition of the material collected for the O’Dubhda Archive, which included articles from newspapers and books, letters and anecdotes from many parts of the world. Members were encouraged ot keep sending any references to O’Dubhdas that they find. Conor MacHale’s “O’Dubhda Country-Tour Guide to Tireragh” was launched and will be invaluable for anyone wishing to visit local sites on their own. The Irish Heritage Research Centre is able to deal with e-mail requests for information about genealogical research, and can reply quickly, and with photocopies of relevant documents. This provides an easily accessible facility that is very cost-effective. (contactHERITAGE@iol.ie ) Conor gave a talk of the Dowds of Dublin, which could have been sub-titled “Ennicrone to the White House.” He explained that a civil war among the O’Dubhda in the 15th century led to one of the clan moving to Drogheda and founding a family there. His descendants became influential in te Dublin area and were merchants trading as far as Chester in England, and perhaps even to London. It was from London that Henry Dowd emigrated to America in 1639 and Mamie Doud, widow of President Dwight D Eisenhower, and her son, John Doud Eisenhower, are descended from this family.

The Rally concluded with a banquet at Beleek Castle, Co. Mayo. (Pictured right) This castle houses a fine collection of medieval armour and equipment, as well as artefacts from the galleons that sunk off the coast during the Spanish Armada. A fine meal was followed by a musical entertainment that brought the Rally to a fitting conclusion.