On 11th September, the O’Dubhda Clan again answered the call and gathered at Enniscrone for the fourth rally. They came from Australia, the USA, Ireland, Scotland and New Zealand, and the ages ranged from 5 week-old Kirrell O’Dowd for Co. Kildare, to 80+ year-old Sean O’Dubhda from Kerry: Sean was attending his fourth rally! A party of O’Dowds from California that was visiting Ireland heard about the rally and promptly headed for Enniscrone, where they were warmly welcomed and given an introduction to the area. As has become customary, trips were arranged to visit sites associated with the history of the O’Dubhda clan.

At the meeting of the Clan Association in the Atlantic Hotel, it was unanimously agreed to elect Thomas J Dowds , from Scotland, to be Taoiseach, and Dr Richard F Dowd, from New Jersey, to the Tanaiste. Tom’s roots lie in Kilglass and Easky, near Enniscrone, while Richard is descended from a family that left Ireland during the Great Famine in the middle of the 19th century.. Both are to be formally inaugurated at the next clan rally, the date for which was agreed as 1st to 3rd September 2000. The members heard a delegation from Bonniconlon, led by Liam Gillard, which asked for support towards their project to erect a memorial to the O’Dowda family, in particular to Colonel Baron James Vippler O’Dowda, who gave his life in the 1798 Rising. It was agreed that the Association would give consideration to the proposal. Subsequently, significant donations were made by the Taoiseach-elect and Clann Ui Dubhda Teo to the fund-raising committee. The week-end finished with a banquet at Beleek Castle, Ballina, where two young Australians, Tammie Smith and Andrew O’Dowd, announced their engagement. A presentation was made to the couple by the Taoisach-elect.

(Update – The news from Queensland is that the couple are now married and have started a family – the clan continues to grow!)

On 5th July 1998, the Taoiseach-elect and a party representing the O’Dubhda Clan travelled to Bonniconlon for the unveiling of a memorial to Baron James O’Dowda and the men who fell in the Rising of 1798. The guest of honour was An Taoiseach (Prime Minister) Bertie Aherne, who had taken time out from his busy schedule (the Good Friday peace negotiations were being implemented) to travel to the West for the ceremony. The monument is also a tribute to Thady O’Dowda and his family who lost their estates because they refused to collect rents from their tenants, who were starving during the Famine of 1845-48. Afterwards, a wreath was laid at the memorial on behalf of the Clan. Later in the year, another small group travelled to County Longford to represent the Clan Association at a re-enactment of the Battle of Ballinamuck: the battle where General Humbert’s Franco-Irish Army surrendred, terminating the Rising in the West, and after which Colonel the Baron O’Dowda was executed.

Right: The Taoiseach-elect at the O’Dowda Memorial Bonniconlon 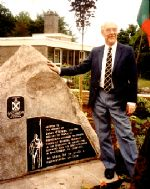 Visitors from the USA and New Zealand arrived in Enniscrone to see their ancestral homes, and to undertake some genealogical research. The Irish Heritage Research library, set up by Conor MacHale (with some heavy investment), was able to secure several minor, and a few major triumphs for clients in their ancestral quest. The library is also assisting in the production of a number of publications, from which it is hoped income will be secured that will maintain the O’Dubhda Clan into the next millenium and reduce (or even remove the need for) subscriptions. Among the proposed publications are A Guide to Irish Genealogical Research, a new work on the Greer Family, O’Dubhda Family History, O’Dubhda Legends, and The French Invasion of 1798.