There are three coats of arms that are used by different branches of the O’Dubhda Clan.

The earliest recorded arms in the Office of the Chief Herald of Ireland, are those of Cathal Dubh O’Dubhda, Taoiseach of Tireragh, who registered the arms in 1574, and who died in 1582.

The shield is gold, with a black St Andrew’s cross. In the top, between the arms of the cross are two crossed swords, and in the lower part an oak leaf.

The crest is an arm clad in armour and grasping a spear, issuing from a golden crown. 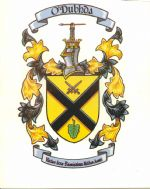 Blazon: (The heraldic description is) : Or, a saltire sable; in chief two swords proper in saltire, the dexter surmounted of the sinister, pommels and hilts of the field: in base an oak leaf, vert.

This has been adopted as the arms of the Taoiseach and the Clan Asssociation.

Another coat of arms was registered by Donal O’Dowd of Ardnaglass Castle in 1608. This Donal is the ancestor of the O’Dowds of Mayo. This coat of arms is the one shown in most books as that of the clan, although it is not as old as the one above.

The shield is green with a gold St Andrew’s cross. Between the upper arms of the saltire are two crossed swords. 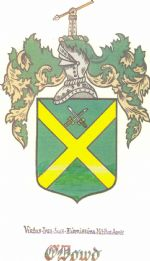 The crest is an arm clad in armour and grasping a spear. Unlike the earlier crest, there is no crown, and the spear is sloping down to the front.

Blazon: (The heraldic description is) : Vert, a saltire or, in chief two swords proper in saltire the dexter surmounted of the sinister, pommmels and hilts of the second.

The motto is exactly the same as above: Virtus ipsa suis firmisima nititur armis. These arms have been adopted as those of the Tanaiste.

A third coat of arms is associated with the O’Dubhda name. These arms were first mentioned in a manuscript that dates from 1714 and refer to a person of the name “Dowd“, or “Dowde” in a later version. They are quite distinct from the other O’Dowd arms, and are most likely those of the Dowds of Dublin, and refer to the voluntary exile of Aodh O’Dubhda, whose 5 brothers were killed in the O’Dubhda civil war in the 1450’s (the 5 doves in the arms). It is also possible that they are “canting arms”, i.e. the arms are a play on words: viz. “doves” sounds like “Dubhda.”

The arms are a silver shield with five red doves, two at the top and bottom and one in the centre. 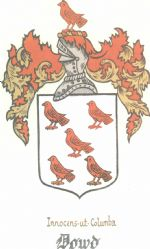 The Crest is a red dove.

The motto is Innocens ut columba (Innocent as a dove) – this has been taken to refer to the death of Aodh’s brothers.

When James T O’Dowd was appointed Auxiliary Bishop of San Francisco, with the title Bishop of Cea, he chose a coat-of arms, as was customary. It was his decision to use the basic arms of the O’Dubhda of Ui Fiachrach and difference them so that they were suitable for a cleric. Thus,on the shield, the black saltire on a gold field is retained (the saltire, being a form of cross, was deemed suitable) and a scallop shell added at the centre of the cross (this shell is the symbol of St James, the baptismal name of the Bishop). In the top section of the shield, the warlike, crossed swords are replaced by a blue star, the symbol of Our Lady of Peace (the Bishop had been brought up in the parish of Our Lady, Star of the Sea). 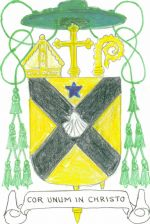 The external ornaments which replace the crest on non-ecclesiastical arms, are a precious mitre, a processional cross and a crozier, all in gold and over the top a green pontifical hat with six tassels, in 3 rows, on each side – this marking his rank as a Bishop. The motto is Cor unum in Christo (one heart in Christ.)