For details, see option under Members

With the end of the Nine Years’ War in 1603, O’Dubhda territory, like that of other “rebels”, could have been in jeopardy, but for the reluctance of King JamesVI & I to be too harsh, and the Treaty of Mellifont left things as they were. Donal O’Dubhda, brother of Tadhg Bui, looked after the interests of Daithi Rau’s son, David while he was a minor and studying at Trinity College. After David came of age, the family formed into two distinct branches, the descendants of David using the surname O’Dowda, and those of Donal using O’Dowd. In 1656, there was a reunion as David O’Dowda married Dorothy O’Dowd. Meanwhile, the Dublin branch of the family, that had moved away in the mid-15th century, had become influential in the capital. As merchants, they traded with England, reaching Chester and even London. In 1626, when Dublin merchants wished to bring their grievances to the attention of King Charles I, it as Alderman John Dowd who was chosen to present their case. The following year, Francis Dowd was elected Sheriff of Dublin and Master of the City Works. During the early part of the century, the govrnment was happy to assist those wishing to emigrate and landowners often raised troops to fight for European rulers. In 1629, Col. Edward Dowd raied a regiment to fight for the King of Spain, but en route for the coast, decided to attempt to sack the City of Derry. His attack failed and he was hanged.

War of the Three Kingdoms

When the argument between King Charles and his Parliament was about to break into open war, the Irish staged a pre-emptive strike and seized control of some parts of the country. Tadhg Riabhach O’Dowd was in command of the garrison at Sligo in 1642, and, as a Lieutenant-Colonel was the officer who surrendered Ballymote Castle to Cromwellian forces in 1652. His family settles in Swinford, Castlebar, Belfast and Loiusburgh, where they have maintained their family tree. In 1646, the members of the Confederate Catholics who met at Kilkenny included Edmund O’Dowde of Porterstown and Thady O’Dowde of Rossburr, in their ranks. The Commonwealth period saw the transplantation of Catholics from all over Ireland into Connacht. David O’Dowda was dispossessed of his estates in Sligo and moved to a small estate in Bonniconlon, while Donal O’Dowd was forced to go to Killeaden. It was this that ended the O’Dubhda ownership of territory in Tireragh that had been in the hands of the clan for almost a Millenium and a half. 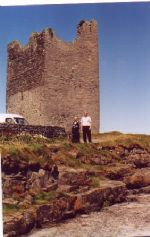 When King James VII & I was deposed in England, he turned to Ireland for support, and the Earl of Tirconnell gathered an army to assist him. Several O’Dubhdas enlisted, most of them in the regiment of the Earl of Clanricarde. Where the original muster roll shows only one, an Ensign David Dowd, later musters show 4, a Captain, a Lieutenant and 2 Ensigns, and it is known that three of the sons of David and Dorothy served in the regiment. The eldest, David, who was noted for his height, was killed in the battle at Oldbridge on the Boyne (1691); James fought at Athlone and was killed at Aughrim (the sword having to be filed from his hand, which was swollen from his exertions) in 1691: Tadhg survived and was listed as an outlaw in the Act of Attainder of 1696, and left to serve as one of the “Wild Geese” in the army of Louis XIV, and died in France in 1737. Jane, the sisterof these men, married Marcus Keating, and her son became a member of the French nobility. Another clansman, John Dowd, is listed as Captain of Grenadiers in Sir Michael Creagh’s Regment. After the Boyne, this unit withdrew to Dublin and spied on the Williamite forces for several weeks before being discovered: although there is no record of what happened to John. The Acts of Attander of 1696 mention two O’Dubhda, other than Tadhg: these are Charles Dowd of Grangebeg, and Faghery Dowd of Bally-Faghery. The Williamite conquest brought an end to most of the Catholic landowning families, and many of the ablest young men left for service abroad: France, Spain and Austria were only too happy to recruit Irish soldiers into their amies – the “Flightof the Wild Geese” had begun.

The year they were married, David and Dorothy O’Dowda had been compelled to re-settle in Bonniconlon in Mayo, an area that still had connections with the old Ui Fiachrach: for a time it was called O’Dowdastown. Their younger sons, Dominick and Francis lived there with them. Dominick married Ellice Dillon and had three sons. David inherited the Bonniconlon estates on the death of his father in 1737, while the younger sons left for foreign service. James served in the French army and died without issue. Thady enlisted in the Austrian army reaching the rank of Lt. Colonel. He married Antonia, the daughter of Baron Vippler and had two sons, James and William. When David O’Dowda died, his nephew, James Vippler O’Dowda returned from Austria and became The O’Dowda, and later inherited the title, Baron Vippler. In 1798, he raised a company of 200 men from his estates and joined the French invasion force led by General Humbert. When the rising ended at Ballinamuck, he was executed as a rebel. His wife, Temperance Fitzgerald, brought up their two sons, and the elder, Thady became The O’Dowda, but during the Great Famine he refused to collect rent from his people and, facing bankruptcy, was forced to sell the estate in 1854, and leave to live with his son Dr James Vippler O’Dowda in Dublin, thus ending the association of his family with the ancestral lands.