The Mac Firbisigh family of bardic scholars was responsible for the production of many of the manuscripts that give information about the O’Dubhdas and other families. Bardic schools were a peculiarly Irish phenomenon and were the predecessors of modern universities. Several such schools existed, e.g. the MacEgans of Ormond and the O’Daverons of Clare, and were supported by their noble patrons. The MacFirbis school was under the patronage of the O’Dubhda Chieftains to whom they were related, being also descendants of Fiachra, and they specialised in history and Brehon Law. The first record of MacFirbis is in 1138, in the Annals of Tigernach, where there is a report of the death of “Amhlaoibh Mor Mac Firbisigh, ollamh of all Ui Fiachrach in seanchas and filiocht”, ie professsor of history and poetry.

The familiy was originally based at Maghbrun, Co. Mayo, but moved to Rosserk and later Leacan (now Lacken) in Co. Sligo when the O’Dubhda lost Tirawley to the Barretts. Near Easky, they built a castle in 1560 and here they trained scholars, who lived with the local people, in history, genealogy and the art of illuminating manuscripts. These students often took their skills elsewhere, and even the MacFirbis family studied under other bardic scholars, particularly the MacEgans. Some 50 manuscripts, containing the history and genealogies of thousands of Irish families, produced by the MacFirbis school have survived and have been used by scolars over the centuries, and are quoted in the Annals of the Four Masters.

The Great Book of Leacan

Written by Giolla Iosa Mor Mac Firbis between 1397 and 1417, this massive work is in six sections. The 1st section is a History of the World: the 2nd is a History of the Saints, with sub-sections on the mothers of the Saints, the genealogies of Biblical Personages, the Officers of the Household of St Patrick, and the Irish Saints and their genealogies: Section 3 is Genealogy and History, and gives particular attention to the O’Dubhda Chieftains and the history of North Connacht: Section 4 is the Book of Rights, a compendium of Brehon Law; Section 5 is the Dinnschenchus, the story of the derivation of place-names: Section 6 is the Leabhar Gabhala (Book of Conquests) and is an account of Ireland from the Creation to the reign of the last High King, Rory O’Connor (1198). 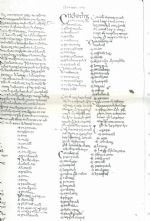 The manuscript sometimes has added entries by the bard, and these bring to light the circumstances of the time. In one marginal entry he asks for ” A prayer for MacFirbisich who wrote this book as an heirloom for all who come after him forever, and in the time of Ruaidre O’Dubhda it was written.” By the time it was completed, Ruaidhri was dead and Tadhg Riabhach O’Dubhda, “a great patron of the arts and the church”, was King of Tireragh. In 1417, as the work was finished, he added “It is Saturday night and the colouring of the whole book is completed and Connacht is in a state of war. It is a fortnight tonight to the first of August. MacFirbis wrote this, AD 1417.” After being missing for several years, this book was found and is now stored in the Royal Irish Academy, Dublin.

Completed in 1391, this work was partly written by Giolla Iosa Mor Mac Firbis. This contains a collection of stories relating to the Ui Fiachrach and Ulster, and has a copy of the famous “Tain Bo Cuailnge.” This is now in Trinity College Dublin.

This book was written in the 15th century by James MacFirbis, the great-grandfather of Duald, who made much use of it and refers to it in his writings, This was a record of the deeds of the chieftains, but contained stories that the chiefs had no wish to make public knowledge, i.e. there is information that does not appear in the official version of the history. This book is now lost.

This was written by Duald MacFirbis while he was at Galway in 1650, and brings the genealogies of the Great Book up to date, while making use of material from other sources now lost, including the Leabhar Bhalb. Duald was a noted scholar with a knowledge of Latin, Greek and English, as well as his native Irish, and was the foremost authority of the age on Brehon Law.

Like his predecessor, he too made marginal comments that illustrate the period well. In one he comments, “It is no doubt a worldly lesson to consider how the Gaels were at one time conquering far and near, and now, not one in a hundred of the Irish nobles at this day, possesses as much of his land as he could be buried in, though they expect it in this year 1664. This is not the time or place of compiling this book, but this extract I have added some time after.”

Six years later, 1671, and into his eighties, Duald set out to walk to Dublin. While resting at Drumflin, Skreen, he intervened when an English soldier tried to molest a young girl, and was stabbed to death by the soldier. With his death the Bardic tradition died.

This entry is dedicated in fond memory of, and grateful thanks to MacFirbis of Leacan, by Thomas, The O’Dubhda, Taoiseach of Tireragh, 28th February 2003.